‘The vat you must know, is a formidable looking thing, 9’ deep and about 6’ wide and is sunk into the earth right up to the top’

William Morris to Aglaia Coronio 28 March 1876, Morris by Himself

‘Deep within plants are to be found organic compounds known as alkaloids. Well-known ones include morphine and quinine. There is an indolic alkaloid group which have many different properties and these idigoids perform several tasks; they can be antibacterial, filters of UVB and infra rays and some are poisons forming the plants unique defence mechanism, repelling attack from insects and mammals. Hidden away in this group are the precursors of indigo, such as indican. Combined with a sugar these initially colourless compounds are referred to as inactive glycosides, which are released and become active when under attack, or through enzymatic hydrolysis – the initial process that converts indican into indigotin – indigo.’
Extract from the best seller ‘Stitched Shibori’ by Jane Callender

THE EXTRACTION & CONVERSION OF INDIGO THROUGH FERMENTATION

The source of natural indigo is to be found in species of several different plant genera growing in many parts of the world. The main genera, Indigofera (Leguminosae family) is found in Africa, India, Asia, America and also Australia but not all plants are indigo bearing. The most widely spread being Indigofera tinctoria.

Known to man in ancient times indigo became the world’s most important dye stuff by the end of the 17th century. This was due, in part, to its ability to dye natural fibres without a mordant. It could also yielded a remarkable tonal range from deepest midnight blues to palest azure hues with excellent permanence. It could be stored after harvest and conversion for use at a later date and this long shelf life made it an extremely valuable commodity, each country and culture having their own means of preparation and storage.

‘In Germany in 1834 following the abolition of trade barriers between the states, trade, manufacturing and engineering began to flourish. Local coal was in demand for iron smelters and steel production and the mining industry was well established by the 1850’s. New industrial processes for printing and dyeing fabric increased the demand for dyes. The winds of change began to blow.’
Stitched Shibori by Jane Callender

The invention in 1856 by 18 year old William Perkins in London of the first coal tar dyestuff heralded the manufacture of synthetic indigo in Germany some years later. Astonishingly the process of dyeing with either is, in essence, the same. The repeated dipping of fabric into the greeny gold vat and the periods of oxidization between each dip allowing it to ‘blue’ provides a continuity bridge from ancient times to the present. This seemingly magical process, which, in itself, is captivating and the fascinating way indigo behaves as a dye has made it inextricably linked with shibori techniques across the globe.

Vats needn’t be 9’ deep and 6’ square. They can be any size as long as the required ingredients are in balance. They can be tiny, half a pint, just enough to dye a few threads, or made in a plastic bucket. A stainless steel container should be used if the vat needs to be heated. There are many types of indigo vat, from a fermentation vat in which the indigo is taken up by the fibre directly from the leaf, to the vat made with 60% synthetic indigo grains.

Both natural and synthetic indigo require specific conditions in order to reduce in water – to change from a microscopic pigment particle into a dye molecule, a ‘chromophore’, which can bond to fibre. Without, indigo remains as pigment in suspension and as such ineffective as a dye. The addition of an alkali is required to adjust the pH of the water and the addition of a reducing agent ‘digests’ or absorbs the oxygen content at molecular level. When these two specific ingredients have been added the water becomes suitable for the reduction of indigo, which when added and given time to reduce becomes an effective dye.

There are different alkalis all of which adjust the pH level of water. For example, slaked lime (calcium hydroxide) is used in organic vats, caustic soda which when in solution creates a lye and the weaker washing soda. The pH level of the vat is often overlooked during the dyeing processes with concerns more focused on the reducing agent, but it is just as important and should be checked continually, particularly when shibori dyeing – a pre-alkaline soak of the prepared shibori helps maintain the level.

There are also different reducing agents including the natural sugars from dates and certain fruits which are used to build organic vats. Hydrotherm DD (Hydros), the chemical used for the hydrosulphate vat, and thio-urea dioxide are synthetic chemical compounds which can be used for natural or synthetic indigo vats. Warm, stale urine provides both, naturally, with ammonia providing the alkalinity and nutrients promoting growth of bacteria for reduction.

As the vat is used the indigo content diminishes and the balance of ingredients will alter giving poor dyed results or none at all. Steps are then needed to bring the vat back into balance and this takes time; patience is required. The pH level needs to be checked first and adjusted. An indication that it could be out of kilter is an undue cloudiness to the liquid. Then more reducing agent can be added if the vat looks very blue/green indicating that the oxygen level is too high. It is always important to add alkali first as this stabilises the solution prior to adding a synthetic reducing chemical. Once the conditions are right more indigo can be added if needed. In some cases if the vat is exhausted – completely spent of indigo – it may be best to start again. Well-loved organic vats carefully nurtured, tweaked, adjusted, nourished and replenished, can chug on happily for many years.

Health and safety. All alkalis can burn skin. Protection should be worn and care taken.

Oxygen is the key to understanding the process.
Indigo vats can be made in different ways and they differ because of the choice and availability of ingredients. The animation illustrates the essence of the indigo dyeing process. This process is the same whether natural or synthetic indigo is used, or woad.
The aim is to dye the fabric – the white oblong – indigo blue.
Microscopic indigo particles are insoluble in water. Certain conditions need to be met before they can become useful as a dye, not merely a pigment in suspension.
The alkaline adjusts the pH balance of the liquid and the reducing agent ‘digests’ the oxygen of the indigo at a molecular level.
When indigo is added to the prepared solution, it is changed into the derivative, indigo white. (Misleading as the liquid is in fact a greenish gold). In this dissolved and reduced state indigo can now act effectively as a dye.

On a sunny day…

The ‘indigo flower’ or ‘bloom’ needs to be removed carefully from the surface or pushed to the side.

The fabric is lowered carefully into the vat and the indigo connects with the fibres with which it bonds.

The fabric appears greenly gold when removed from the vat, but as indigo is re-introduced to oxygen in the air it is restored to its blue insoluble self. As the indigo continues to oxidize while the fabric drains, the ‘magic of indigo’ happens in front of our very eyes.

The process is repeated many times to build up depth of shade, permanence and evenness of dyed ground.

Indigo is synonymous with shibori not only because they both belong to ancient times but because of the fascinating way it behaves as a dye. This is wonderfully evident during the unique and seemingly magical process, which, in itself, is captivating.

Vats can be any size as long as the ingredients are in balance to the amount of water used. The indigo content is the only ingredient that can be either less, for a weaker paler vat, or more for a stronger, darker vat.

The old vats at the Kekfesto Museum in Papa, Hungary, the only blue print museum in Central Eastern Europe. The traditional Hungarian blue-print technique is on the UNESCO Cultural World Heritage list. Master blueprint dyer Zsolt Gelencser tending his newly built reduction bluedye vat at his studio and the blueprint cloth oxydising. A blue print staged coming out of one of the old vat pits at the museum which is part of the EU Genius Loci sights scheme.
Use of images by kind permission of the Kekfesto Museum and master dyers Zsolt Gelencser and Tóth Ildikó.

Indigo ingredients at the ready, lime and natural reducing agent, perhaps chopped dates. These large vats at the Institute of Rural Development, Hyderabad, India are sunk into goats dung where they are kept warm and at a constant temperature. Prayer circles and marigold petals protect each vat. Other vats at indigo dyeing areas in Sind, Pakistan and Kutch, India. 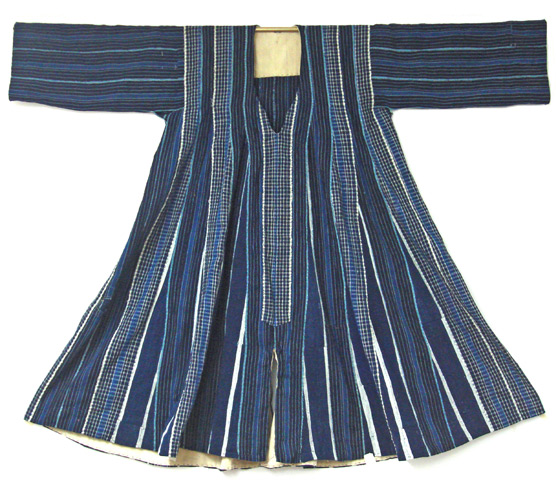 Image one shows us a dye vat in Oshogbo, Yorubaland in Nigeria. It is one on the last places where the Yoruba women dyers use natural indigo. Also shown are the dye pits at Kofar Mata, Kano, Nigeria where the men have been dyeing cotton for over 500 years. Note the wonderful woven pit covers. The Tuareg men of the Sahara come here to buy their famous dark blue black veils. Tailored in Benin from cloth woven in Nigeria, the riding coat is used for ceremonies by the Ewe of Ghana.

STRAWBERRY THIEF
Vats were made up in the shades that Morris wanted for designs so a strong vat was kept for the deep background blues and what he called a ‘half vat’ or ‘china blue’ was used for the paler shades. This in combination with bright yellows – in The Strawberry Thief, weld – gave fresh greens. Here the red used was alizarin dye and not madder. Printed in 1883 at Merton Abbey and in the same year he writes to his daughter Jenny from Kelmscott House ‘… I was a great deal at Merton last week, though I didn’t sleep there, anxiously superintending the first printing of the Strawberry Thief which I think we shall manage this time … In the Strawberry Thief we see that at last the indigo discharge technique of printing at Merton Abbey had finally been perfected. The birds were drawn by the architect Philip Webb, a close friend, who built Red House for Morris. Morris loved his indigo dyeing activities and would call out cheerfully to a visiting friend ‘I’m dyeing, I’m dyeing, I’m dyeing’, and appear with fore arms blue up to the elbow.
Gouache studies of William Morris’s Strawberry Thief by Jane while at college.

Add your email below to receive occasional emails about workshops, events and products.