When I was a child with hair down to my shoulders, I wore a dress of plangi-cloth.

Crisp knife-edge folds in cotton, silks that float on a breath, the chameleon nature of manmade fibres; the unique characteristics of cloth are revealed through the manipulations of shibori. But how to properly define the process? The most useful word is compression.
From the best seller ‘Stitched Shibori’ introduction by Jane Callender

The Japanese verb ‘shiboru’ communicates any number of actions that imposed pressure, such as ‘squeeze’ and ‘wring out’ and could be used for wringing out a wet towel, or to milk a cow, to press a person for information. ‘Shibori’ the noun, was first used for the traditional patterned textiles of Japan created by these actions as compression by various methods, left a resist when applied to fabric prior to dyeing. Only when the fabric was opened out after the dyeing processes was the resist seen. On natural fibre fabrics the desired result is usually a resist – though a sculptural effect can be maintained. On synthetic fabrics however, the physical sculptural characteristics, resilient to washing clearly show that these compression processes have taken place.

The word embraces textiles marked by a wealth of imaginative compression techniques found all over the world. Traditional shibori includes the Adire cloth of Africa, Indian Bandhani, Plangi and Tritik of Malaya, the fabrics of Japan, and of China. It has become the accepted umbrella term for all the skills which were, and are often still referred to as ‘tie and dye’. ‘Shibori’ includes the purest of ancient dots, the vibrantly complex multi-coloured kaftans and ‘T’ shirts of the 60’s, the scrunched and sculptural surfaces of synthetic and contemporary fabrics.

The Shibori process is quite different from other surface decoration techniques. Rather than being kept still and flat, fabric is twisted, turned and engineered into bundles, bunches and scrunches of irregular and regular folds and folded stacks before it is dyed. Any number of props can be used; boards, thread, string and the like, to hold it secure during the dyeing process ensuring that the compressed area will resist the dye successfully. Being intimately engaged with cloth the maker’s touch and pressure is directly reflected in the outcome, and the actions performed are as much ‘shibori’ as the finished item. The means to create compression can also be set in place during weaving and how dye is applied is open to any number of methods.

Traditional shibori techniques include stitch resist, wrapping the fabric to a central support such as a pole, cylinder or rope; binding and capping and board clamping and each technique gives a very different and distinctive resist. Within these any number of variations can be found to effect innovative shibori textile art and there is no limit as to how they can be used or how the individual interprets ‘shibori’.

The contorted forms of cloth born out of the shibori process have inspired textile artists and fashion designers to develop the transforming abilities of shibori on fabric for many years. Cloth, in retaining the forms forced upon it after restrictions are removed, offer futuristic textures and ethereal sculpted forms. New machinery to develop shibori yardage have long been in use and with the continual invention and introduction of new fibres, dyes and compression techniques shibori continues to take its place in fashion and furnishings. No matter how futuristic it becomes it does not forget its history, for at the same time it speaks clearly of its traditional roots – of simple mark making, of the delight in observation, decoration, pattern and design.

Around 1608 pioneering craftsmen in a small new town started a business and over the years built a thriving shibori community from humble beginnings. Arimatsu was the 42nd rest station on the eastern Tokaido. At first producing small hand towels, tenugui, to sell to travellers they went onto produce yardage for kimonos and domestic textiles. Inventing new ways to work shibori they created innovative patterns and designs as well as producing familiar ones. The postal town became renowned for its textiles and became a prosperous trading station along with the neighbouring town of Narumi. Travellers stopped and shopped and tourists and artists would visit walking, talking and shopping in streets vibrant with the pattern and movement of shibori cloth. The town was rebuilt in 1784 after it was raised to the ground by fire. Some of these new builds still stand either side of the narrow streets of Arimatsu, now treasured as a cultural heritage site where a shibori community continues to produce and promote shibori.

These charming staged miniatures were created for the Shibori Kaikan (shibori museum) in Arimatsu, now a suburb of Nagoya, Aichi Prefecture in Japan. They were made in 1984 to celebrate the opening of the museum. The images are shown here by kind permission of the museum. They illustrate delightfully the process of creating shibori and take the visitor from the first stages to the point of sale. 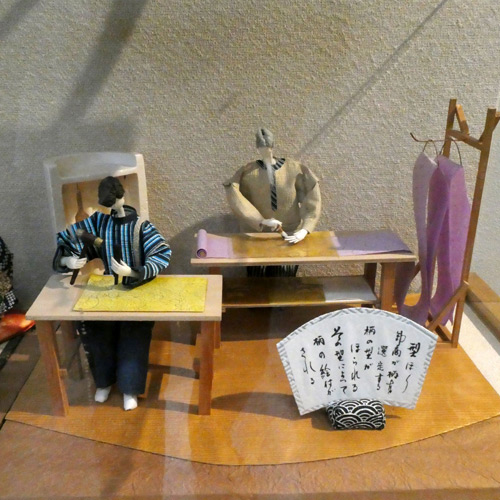 1. The stencil cutter prepares a stencil by punching through the stencil paper. His assistant transfers the design to a bolt of fabric by brushing through the tiny cuts and holes a fugitive ‘sighting’ ink, traditionally the juice of aobana, blue flower. 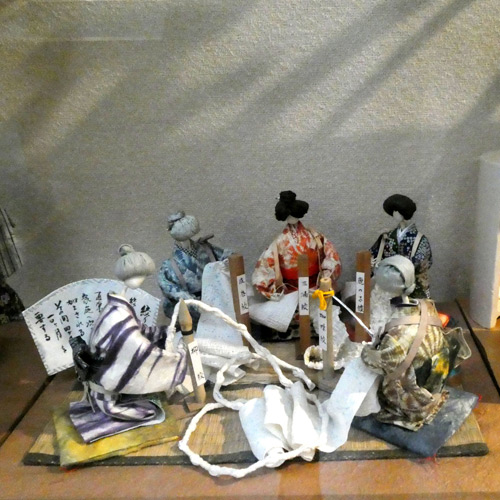 2. Sitting on the flat bed of the stand which supports the fabric artisans are able to tension the fabric, their body weight keeping the stand and support stable. Stitching and binding are both being prepared on yardage. 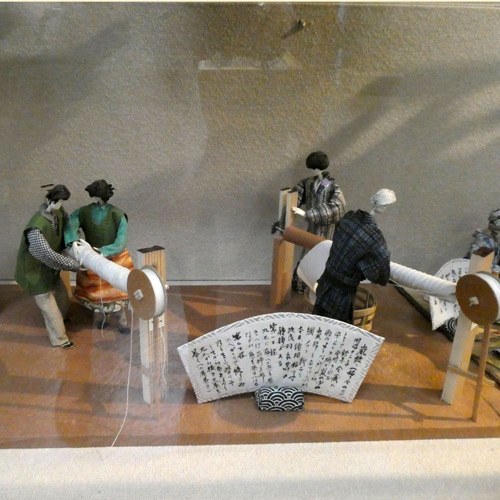 3. An apprentice turns a handle to rotate the pole as the master controls the placement of the yarn. Together they ease the fabric up the pole to create arashi shibori – storm pattern. The technique was invented in Arimatsu by Kanezo Suzuki in 1880. 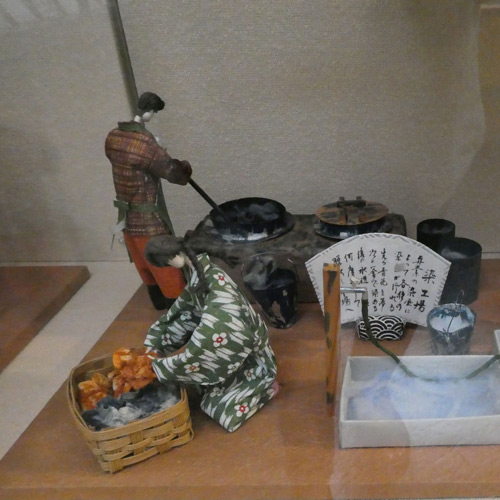 4. The fabric is dyed in indigo. There is more than one vat and many buckets. An assistant to the right sorts through fabrics – perhaps these are fabrics that require a final rinse after being undone. 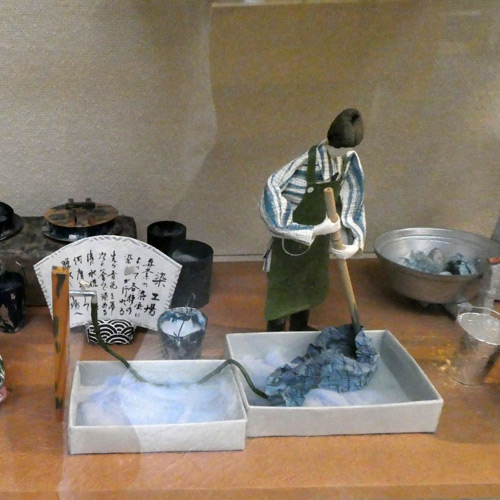 5. After the dyeing process the endless task of washing and rinsing. Fresh water is hosed in to keep the water clean and the fabric is kept moving. 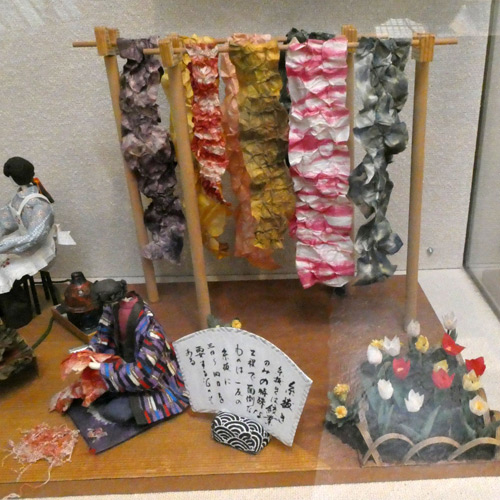 6. The long process of removing binding and stitching thread is underway to reveal the resist and fabrics are hung up to dry fully. They still retain a scrunched up appear- ance. They will need another wash and rinse. 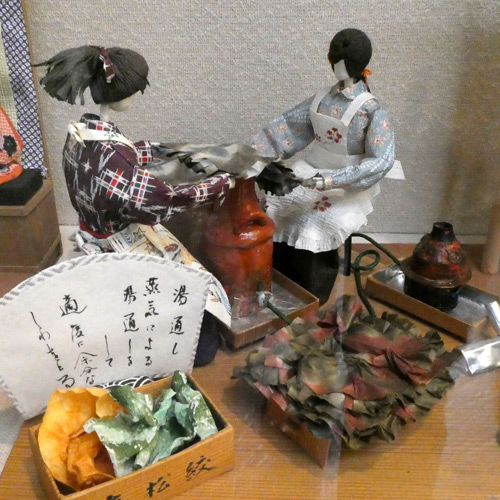 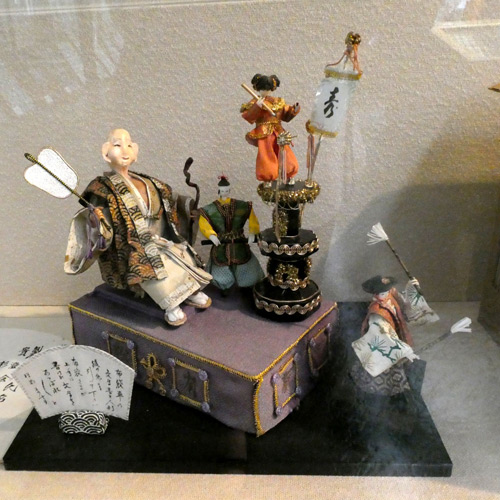 8 Customers come to view and ponder the various fabrics from which to make their choice. Lengths of kanoko shibori are displayed at the back of the shop, some have been hung to show how they would look as a kimono. An indigo stitched and bound pattern of undulating lines – tatewaku – hangs on the left with tiny bound detail. At the back are kumo shibori motifs, the spiderweb, which are readily associated with tie and dye.

9. Here we see a marionette sitting on an Arimatsu festival float on a day of celebration. He is Hotei, the pot- bellied god of prosperity, contentment and guardian of children. One of the seven gods of Good Fortune he carries a Chinese ‘wish granting’ fan, an oogi.

Add your email below to receive occasional emails about workshops, events and products.

All images and designs are © Jane Callender. No reproduction allowed without express written permission.
Website by Sarah Callender Design